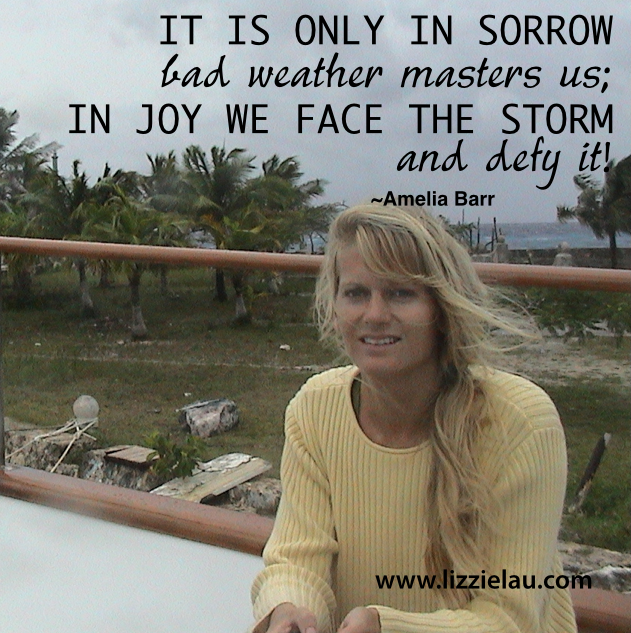 I’ve been in more than my share of hurricanes.  Somehow I’ve never lost any possessions, but I would certainly consider two of my experiences “brushes with death”.  My first big storm was Andrew in 1992 which I felt full force on 90′ dive boat tied up in the Miami River.  At the time I had no idea how serious it was.  I helped evacuate all the passengers and stayed on board because I had nowhere better to go.  It was fun and exciting, right up until the middle of the night when the eye of the category 5 storm was on us and we were setting up our scuba gear in case the boat sank.  Andrew was easily the most intense experience of my life, until 1998 when we nearly capsized on a 105′ motor yacht in Hurricane Mitch, and then 2010 when I gave birth naturally after 36 hours of labor. 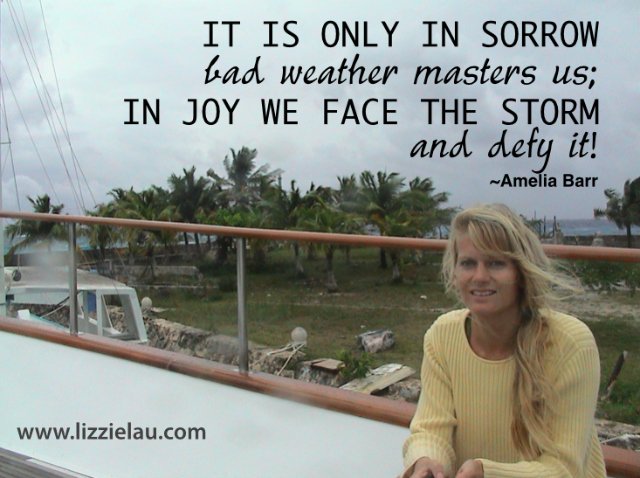 I wanted to share that background so that you know I have the utmost respect for big weather, and would never make light of storms which took lives and destroyed homes.

Every storm season, scattered in between the big ones, I experienced several smaller ones. Hurricanes that wouldn’t cause any major destruction, but would threaten to ruin the trip for a group of 16 paying customers.  Because I was in the business of feeding and entertaining a crowd, certainly not of guaranteeing great weather, I had to maintain a “make the best of it” attitude. When a storm threatened to ruin a snorkel or dive trip, and we had to pull in and tie up at a dock to ride it out, the first thing I’d do is make a shopping list and send a crew member to the liquor store! There is nothing like free-flowing booze and calypso music to drown out the complaining of people who paid $1800 to swim with dolphins in flat calm water for a week and are now faced with several days at the dock followed by choppy seas.

Rum Punch In The Bahamas

In the Bahamas, we made strong, yummy rum punch with Bacardi, which was still being produced in the Bahamas back then and was pretty inexpensive. We’d mix up simple syrup, and when it cooled, we’d pour it into our big Gatorade dispenser and add lime juice, rum, orange juice, pineapple juice, a lot of rum and usually some bitters and grated nutmeg. It was set up right beside the ice maker, and we made the best ice because we had a reverse osmosis system on the boat so the water was made fresh from seawater every day. The ice was clear and tasted like – nothing. Rum punch in red Solo cups on the deck of a boat in the Bahamas invariably helped encourage a widespread attitude adjustment.

As soon as our guests started drinking, one of our captains, who had once been a topless showgirl and still had awesome moves, started teaching everyone the electric slide. Hilarity ensued. It was a guaranteed way to get the party started. We encouraged everyone to join in and told them that there was no wrong way, only interesting variations and innovations!

In Roatan, Honduras, we used any excuse for a party, full moons, hurricanes, even earthquakes. We set up full Caribbean Night blowouts with food and a DJ playing dance music. The bonus to having a party on shore instead of on the boat was that we could dance on tables. Our drink of choice was a Roatan favorite, the MonkeyLaLa, named after a lizard that lives on the island. It’s a great drink for hot, sultry Caribbean nights. Blend vodka, Kahlua, cream of coconut, vanilla ice cream and a little crushed ice. It’s a crowd pleaser for sure and nearly always led to dancing on tables, and often to skinny dipping!  Ok, yeah, that was just me and Damon in the lagoon.