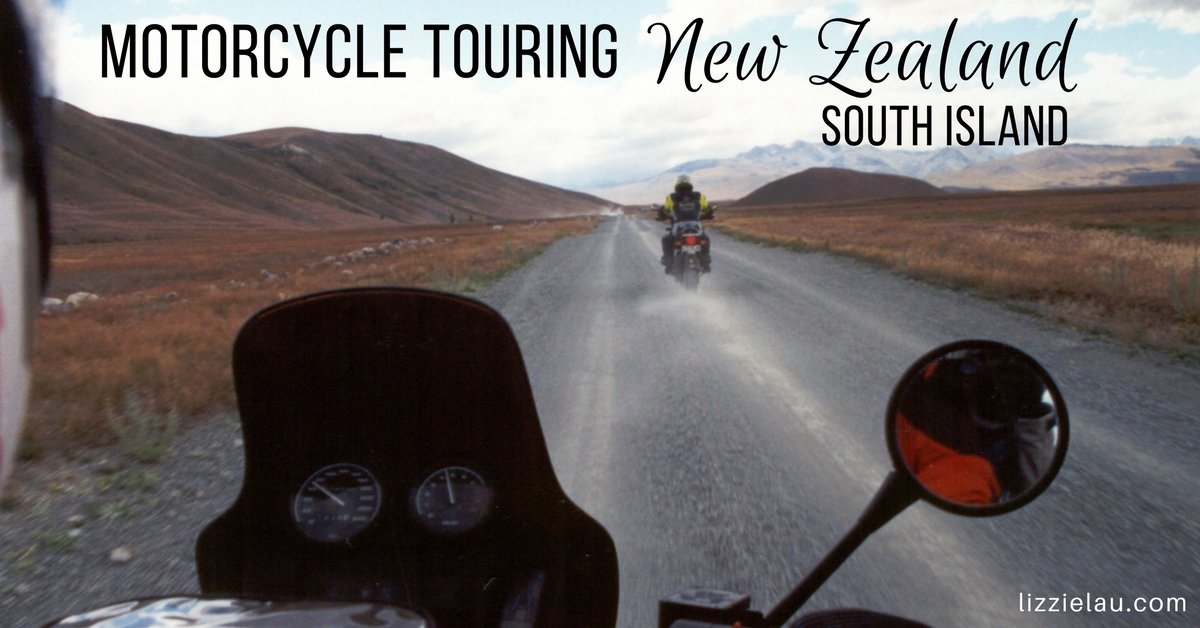 Our guide, Luka, met us at the airport when we flew in from Aukland, and blew our minds by telling us there was only one other guy in our group! We checked into our hotel, then picked up our BMW R1100GS and wired in our intercom and my electric vest. Luka, on an R80, took us on a checkout ride to Akaroa.

It became immediately apparent that my most important job as navigator would be to remind X2 to stay on the left side of the road!

We stopped for a latte and talked racing. X2 is ex superbike and veteran motocross. Luka races Buells. Satisfied with our experience level, Luka suggested we go back along a single lane dirt track he’d been meaning to check out. It was an incredible ride. Too good really. We worried that night that we’d surely seen the best NZ had to offer. How could it get better than that?

We met the other rider, Konrad, at dinner and liked him immediately. An experienced motorcycle tourist from Munich and also a BMW owner, we had a lot in common. Unfortunately he’d had a spill that day on a gravel road and didn’t seem keen on exploring any others. We made it our mission to convert him to a dirt tracker.

At breakfast the next morning we went over the map of our planned route to our next stop, Omarama. Luka led us out of the city in the van carrying our luggage and spare parts. We stopped at Lake Tekapo for photos at the little Church of the Good Shepherd. When Luka arrived we had lunch and looked at the maps again. We convinced Konrad to take the scenic route to Lake Pukaki, along a dirt road. It was cold and windy, reminding X2 and I of Montana.

By our second day it was obvious that we weren’t going to do the usual tour. Our enthusiasm was contagious, and Luka met us each morning with the maps having figured out the longest route to our next hotel. Sometimes we ended up backtracking, but it was always worth it. We’d ride all day long, roll into town late in the afternoon to find our bags in our room and a message about our dining reservations. We’d have time for a nice long shower and a siesta before eating.

When we left Omarama we headed east to Duntroon and it got colder and began to rain. We considered turning back but by the time we said it out loud we were already at the turnoff onto the dirt roads over Dansey’s Pass, through Naseby so we continued on. We were back on a sealed road before Ranfurly. We stopped for lunch at St. Bathans.

We skipped Alexandra by taking a back road then up past Cromwell and Tarras to ride Lindis Pass. On the way back we stopped at Tarras for a latte. We should have fueled up. Our fuel light went on as we passed the turnoff to Cromwell and we didn’t see another fuel station until we reached Queenstown on fumes. For dinner that night we rode the gondola up the mountain and enjoyed the spectacular view and the buffet.

We skipped breakfast in the morning and walked to town to check e-mail before gearing up and setting off with Konrad for one of our favorite rides of the trip. We rode through Arrowtown first then backtracked to Coronet Peak and stopped to watch some paragliders and hang gliders launching. We found the turnoff to Skippers Canyon and began our decent along the narrow twisty dirt road with sheer cliffs dropping hundreds of feet.

The next morning at breakfast Luka informed us that he had secured passage on the steamship to Walter Peak Station. It was interesting getting the bikes on board, it is really just a scenic tourist cruise for foot passengers.

We reached the other side after an hour and headed to Lake Mavora all on dirt roads. We had to stop several times to open and close gates as we passed through different farms. We fueled the bikes and had a snack in Mossburn then went south through Opio, Nightcaps, Ohai to the Clifden Suspension Bridge. We ventured out into the fjord lands and followed a road to its end, well, almost – we turned back when it narrowed to a footpath. Back at Clifden we headed north to Te Anau. It was windy and tried to rain but we made it to the hotel without getting wet. After dinner we shopped for long underwear.

The wettest part of New Zealand lived up to its reputation. It was a 1 1/2 hr ride to Milford Sound and it rained the entire time. The waterfalls along the way were awesome and the tunnel was trippy, narrow, dark and downhill. It took us 70 seconds to get through. We parked undercover at the dock and went inside to warm up. I wrung my gloves out and ran hot water over my hands until I could bend my fingers again.

The boat ride out into Milford Sound probably would have been fabulous if we could have seen anything past the rain. Every once in a while it would clear enough for a stunning view of the cliffs and waterfalls, some of which are higher than Niagara Falls. It was still pouring when we got back to the dock and we toyed with the idea of waiting a while at the visitors center but decided that the sooner we got back to the hotel the sooner we could get dry and warm. It took hours to get everything dry.

Here’s a video by someone who got to see this magical place on a great day.

Heading back up north we rode the route that Luka took in the van when we took the Steamship. We stopped in Fairlight just in time to see the Kingstown Flyer as it pulled into the station. We had lunch in Arrowtown at Saffron. The only great meal we had in New Zealand and the best lattes. While we were in the restaurant a photographer from BMW magazine popped in and asked us to suit up and act like we’d just arrived. They were doing some promo shots of a new BMW sports car which they pulled in right behind the bikes. We were happy to oblige. From there it was a nice twisty road, some of it unsealed to Wanaka. We stopped at the hotel then decided to continue to the end of the road to Mount Aspiring. There were lots of beautiful waterfalls and we had to splash through six streams that crossed the road. After dinner we took bread out to feed the duckies and they went mad trying to climb us. Cute.

Haast Pass, nice and twisty. At the coast we went south toward Jackson Bay and stopped for fish and chips. North again to Haast Junction where we fueled up then rode on to Fox Glacier. We stopped and walked partway up but it was too rainy to see anything. It really started to pour so we skipped the dirt track we had planned on riding out to some western beach and rode directly to Franz Josef Glacier and checked into our room. I could see the Franz Cafe from our patio so we slipped out to check e-mail and have a latte before dinner. We had a great meal at the Blue Ice Cafe then back to the hotel to put our riding gear in the dryer for a while.

When we first got up it was clear enough to see the glacier from our room but within half an hour it had closed in again. We rode to the glacier and hiked up to the lookout in full riding gear. We did a scenic one way to Okarito Beach. We didn’t bother with the road out to the White Heron Colony because we enquired in town and it’s only possible to see the colony by boat.

We got to Ross at 12:30 and I spotted a Cappuccino sign. It was at a pub surrounded by antique motorcycles including a 1913 Indian, and Matchless, AJS and Norton Manx from the 50’s and 60’s. A club from the UK had shipped them over. We warmed up with soup by the fire and chatted with some of the bikers.

From there we rode to Arthur pass and got really soaked. It rained fiercely. We saw the sun at 3:37 for half a minute and the ceiling raised enough for us to see the mountaintops. We got caught in a herd of big eyed blonde dairy cows. They didn’t know which way to go. Spinney Cows. We got to our hotel in Greymouth and got warmed up before dinner. We went to a bizarre Tex-Mex restaurant. There was nothing remotely Tex or Mex about the meal except for the ridiculously huge portions. I had mussels. We raced go-karts after dinner. Big Fun!

We had bruise show and tell at breakfast – Konrad had the biggest. Our first stop was at the Pancake Rocks and blowholes. On a spectacular corner, Luka took our cameras and did a photo shoot. Next stop was at the seal colony and lunch at a terrific cafe in a little cove. There was a noteworthy quote on the menu. “Turkish law made it legal for a woman to divorce her husband if he failed to provide her with her daily quota of coffee.”

The ride from Westport to Motuika was great lots of rolling hills and curvy roads. It was after 5pm when we got there so we decided to only go as far as Upper Takaka then turn around. Takaka Hill was outstanding and we got to do it twice because we had to backtrack to Motuika. There was a lot of pebble graffiti on the beach on the way to Nelson but we were riding too fast to read a lot of it. There was a big rainbow as we entered Nelson but we stayed dry.

We took the Queen Charlotte Drive from Nelson to Picton. It was lovely. The road twisted through hills in various stages of logging and reforestation and I snapped photos for Dad. Luka had pre-purchased our ferry tickets so we checked in and boarded. Luka pulled the van in as we were tying the bikes down. It’s a big Catamaran but narrow and open only at one end so they u-turn load all the cars.

It was smooth as glass until we came out of Queen Charlotte Sound – big seas. We sat forward and watched people on the bow get soaked. Luka and Konrad went to the cinema & we cat-napped. The heads were filled with people retching – ugh. It got smooth again as we came around into Wellington Harbor. And then we began our adventure on the North Island. 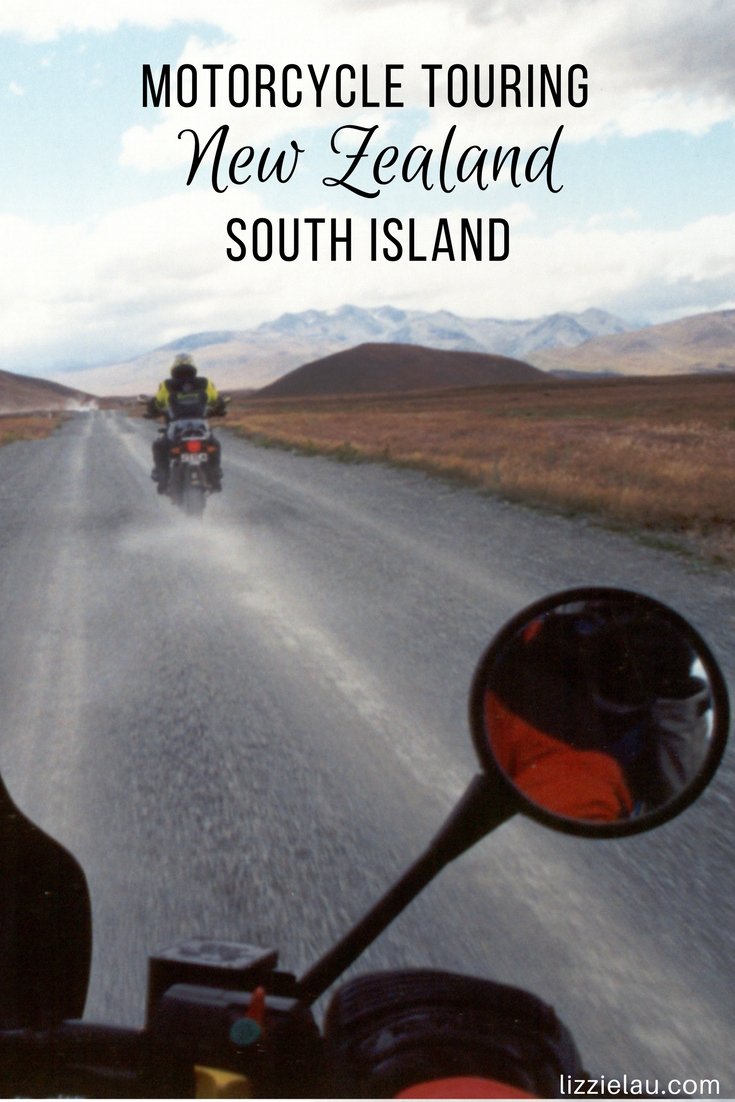