While eating lunch today my family and I watched a single mom struggling with her 3 kids while trying to get them rounded up to get a drink of water.  It doesn’t sound that complicated, but then I only have one, and sometimes getting her from point A to B is pure comedy.

So this mama had one adorable little guy who wouldn’t keep still.  She herded him to the spot she wanted him to wait, and insisted that he stay put while she gathered the other two, but as soon as she turned to go get them he chased after her.  It happened over, and over again.  I could sense her frustration, and wished there was some way I could help.  At one point she managed to get two of them to the waiting spot, but again as soon as she ran to grab the third, those two were on her tail.

It was almost like being at the grocery store and seeing a mom standing helpless as one of her kids has a flailing, shrieking meltdown while she’s trying to keep the other two from joining in or escaping.  Except that this lasted for over an hour!  We were at a discrete distance, so we cheered, and groaned, laughed, and of course took photos and videos of this poor family.  I felt bad when a couple of times we made enough noise that mom looked our way and made eye contact.  It was almost like it was harder for her to deal with the kids, knowing she had an audience.  I know I can relate to that. 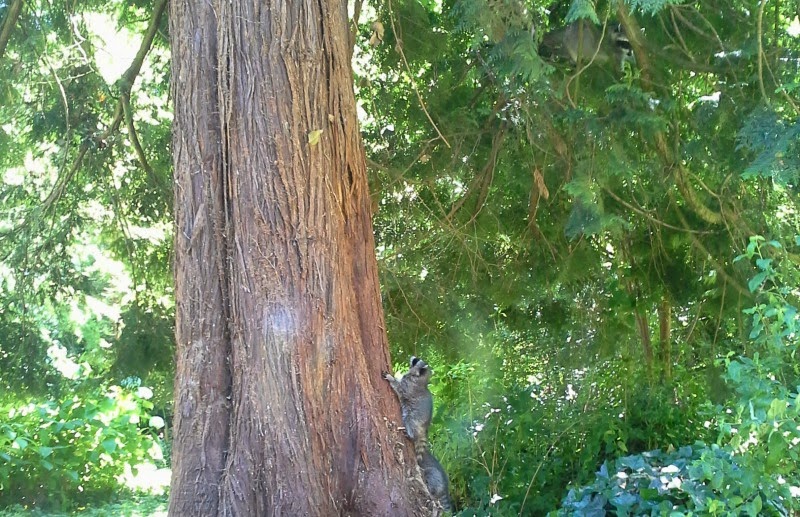 Finally, mama raccoon was able to herd her three offspring down the tree closest to our patio to get them to the creek for a drink of water.