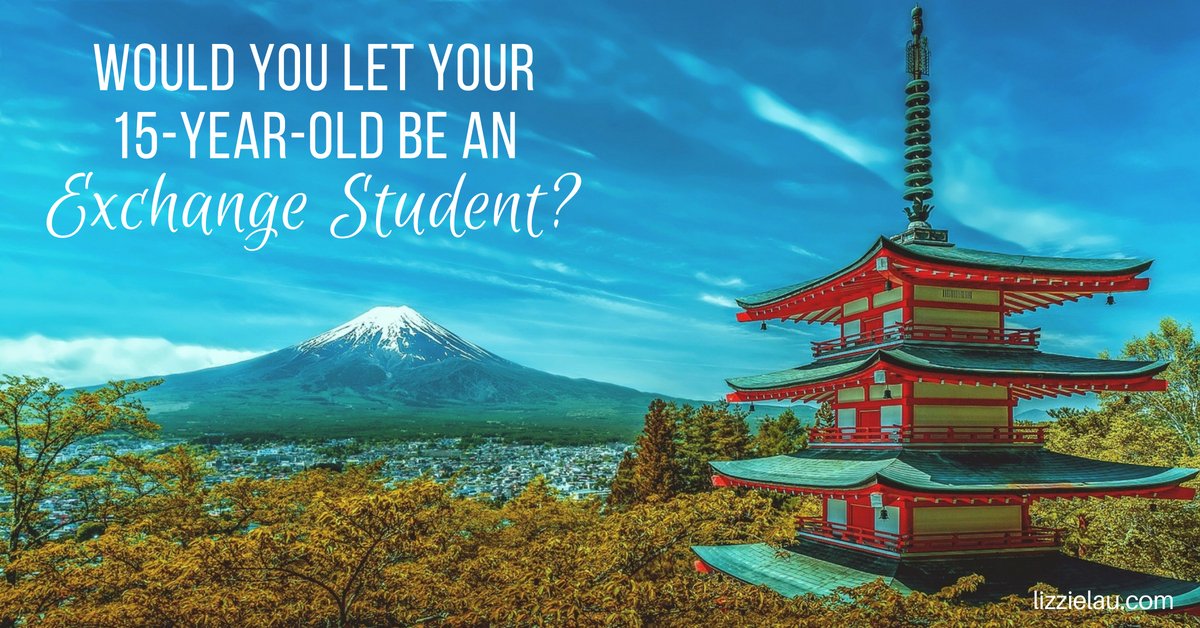 Would you let your 15 year old travel to a foreign country without you?  My parents did.  The summer after the 10th grade I had the opportunity to be an exchange student, flew to Japan and spent 20 days there with a homestay exchange program – I was 15.

I joke that I was raised by gypsies.  We traveled a lot while I was growing up, and my parents almost never went anywhere without my sister and I.  They believed, as I do now, that travel offers children a broader perspective, and whenever possible travel should be part of a child’s education.

In the 8th grade we took a long spring break and traveled through Europe as a family.  It was a fantastic experience, though if you read my travel journal you’d think all I saw were sheep out the window of the car.  This was of course decades before kids had devices in cars, but my parents still had to bark at me to look out the window as we drove through country after country, because I had my nose buried in books.  Now it seems odd to me that it didn’t worry them that I was reading The Amityville Horror and Princess Daisy when I was 13, but I don’t get to judge since I’m constantly telling people that my daughter’s amazing vocabulary is a result of inappropriate tv.

When I was 15, in the summer after 10th grade, I got to be part of an exchange program to Japan.  It was a 3 week trip, 2 of which I spent billeted with a family and going to school with their daughter, and one week we got to tour Tokyo, Hiroshima, Kyoto/Nara, staying in Japanese style hotels and visiting all the touristic and cultural spots.

It was like leaving the planet.  Everything was so different. I had the feeling I was under a dome, inside some kind of biosphere, an illusion created by the overcast days and oppressive humidity I wasn’t used to.

My first culture shock was when we arrived at my family’s home and they helped me get settled in and offered me a bath to get freshened up before bed.  I’m pretty sure I had been briefed on the Japanese style tub because I didn’t have a problem sitting on the little stool washing my hair and getting all lathered and rinsed with a bucket and hand sprayer.  What I did find most alarming however, was that there was no lock on the door and my temporary Mom kept popping in to see if everything was ok.

Going to school by train was a fun new experience. There were all kinds of activities organized, and I got to help out asking and answering questions in an English class. There were only a couple of other students in the program who ended up in Numata-shi with me, and we got to know each other during our activities. One day we were invited to a Kimono shop to try on traditional Kimonos.  It was fun to be fussed over and dressed up in the beautiful kimonos. 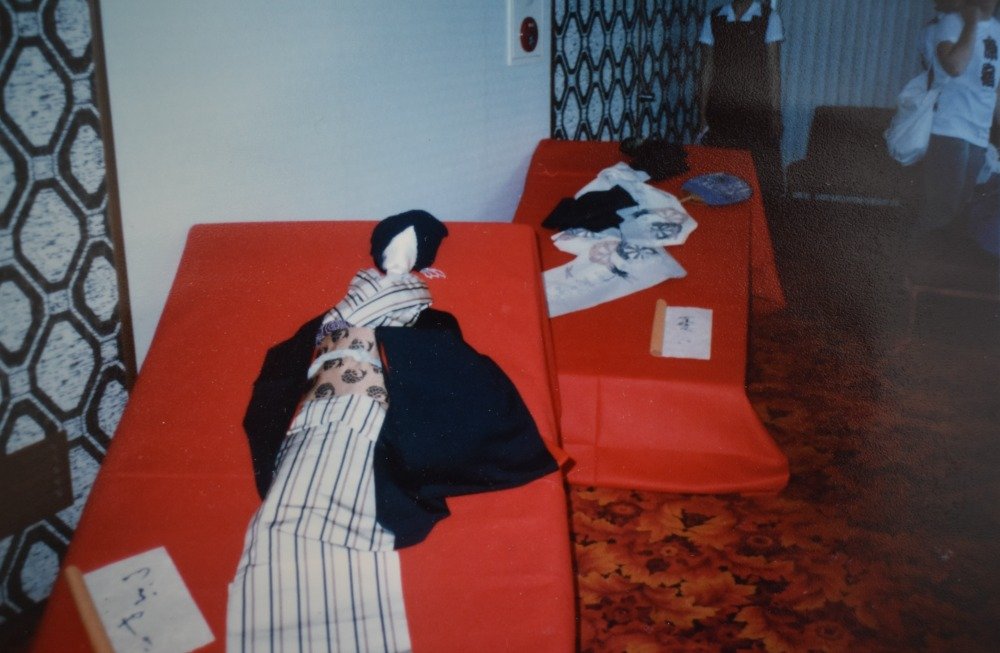 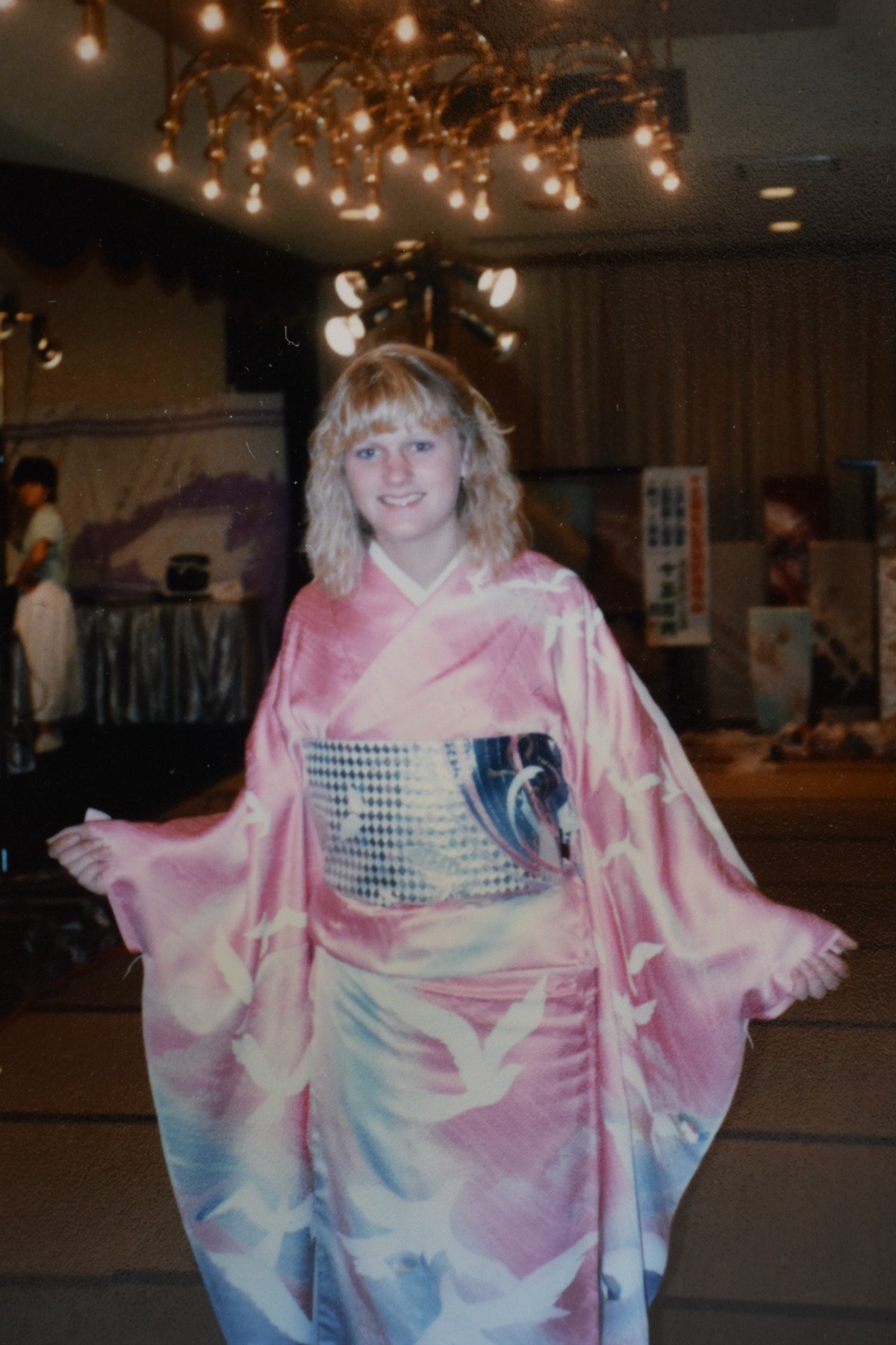 There were a few moments where the language barrier caused confusion, but nothing that was impossible to sort out. One day I was trying to figure out when my photos would be developed and ready to pick up.  Yuki was telling me me the 28th, but I was hearing 28 days, and I panicked because I thought I’d be back in Canada when my photos were ready to be picked up.

Another time culture and communication collided was when my Homestay family told me they were taking me to the Spa for the day.  This sounded cool, but they described it as a hot springs spa, so to make sure I understood, I asked if I was supposed to bring a swimsuit.  Maybe I was in denial, but I had no idea what was happening until I was naked in a room full of Japanese women, sitting on little stools, getting all soaped up before having a soak, yes – still naked – in the hot springs! I wasn’t emotionally prepared for this, but to be honest, even more traumatizing was when we unpacked our lunches in the big common area later, and they told me we were all going to get up and take turns singing Karaoke.

My system shut down. It was too much trauma in one day.  I curled up in a ball. I’m sure they thought I was nuts but gracefully declared me exhausted and unable to perform.

Before we left for our big tour, we had a day off from attending school to visit Expo ‘85 in Tskuba, where I got to ride a stand-up rollercoaster that went upside down, and an immense ferris wheel.  This was my first World Expo. I had a season’s pass to Expo ‘86 in Vancouver and spent a lot of time there over the summer. My family also traveled to Australia in ‘88, so we made a trip to Expo in Brisbane.  Now we’re talking about a family trip to Expo 2020 in Dubai. 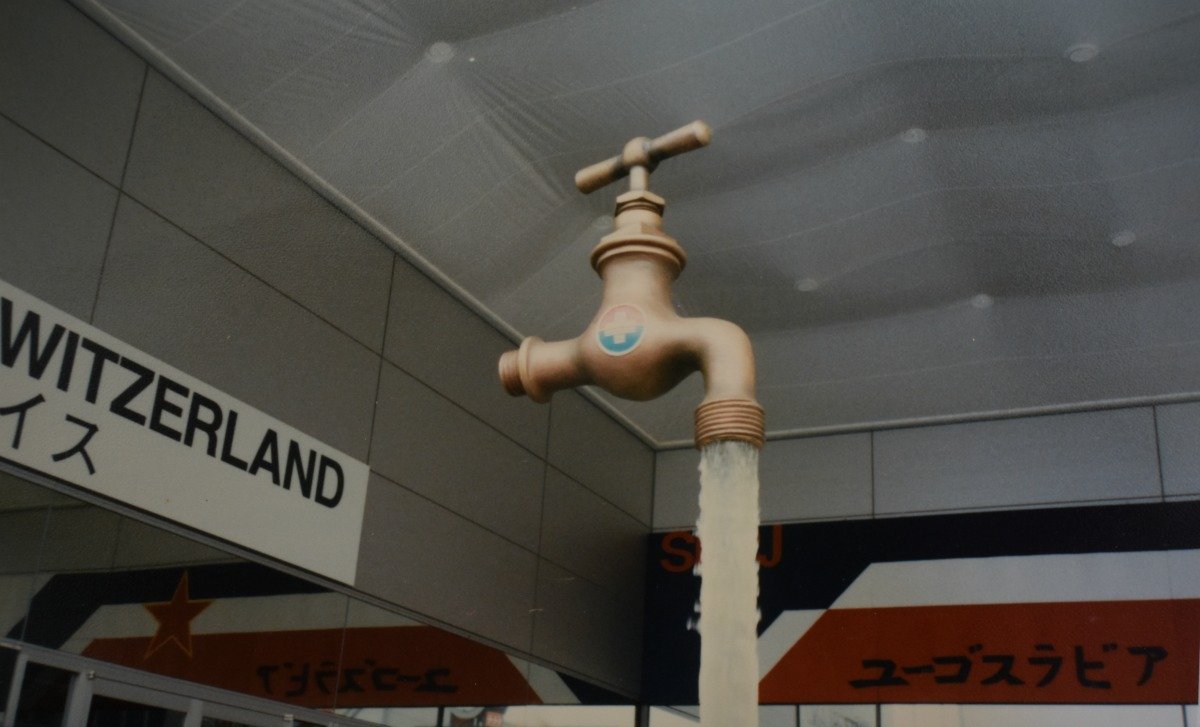 Our exchange student group got together with our teacher/chaperones and spent a week touring Japan.  One of our first tours was through Nijo-jo Castle in Kyoto. The thing I remember most were the squeaky floors, said to have been developed to prevent those sneaky ninja mercenaries from getting past the guards.  The specially constructed floors were called uguisubari which translates literally to “bush warbler guard watch,” but are more commonly translated to “nightingale floors”. 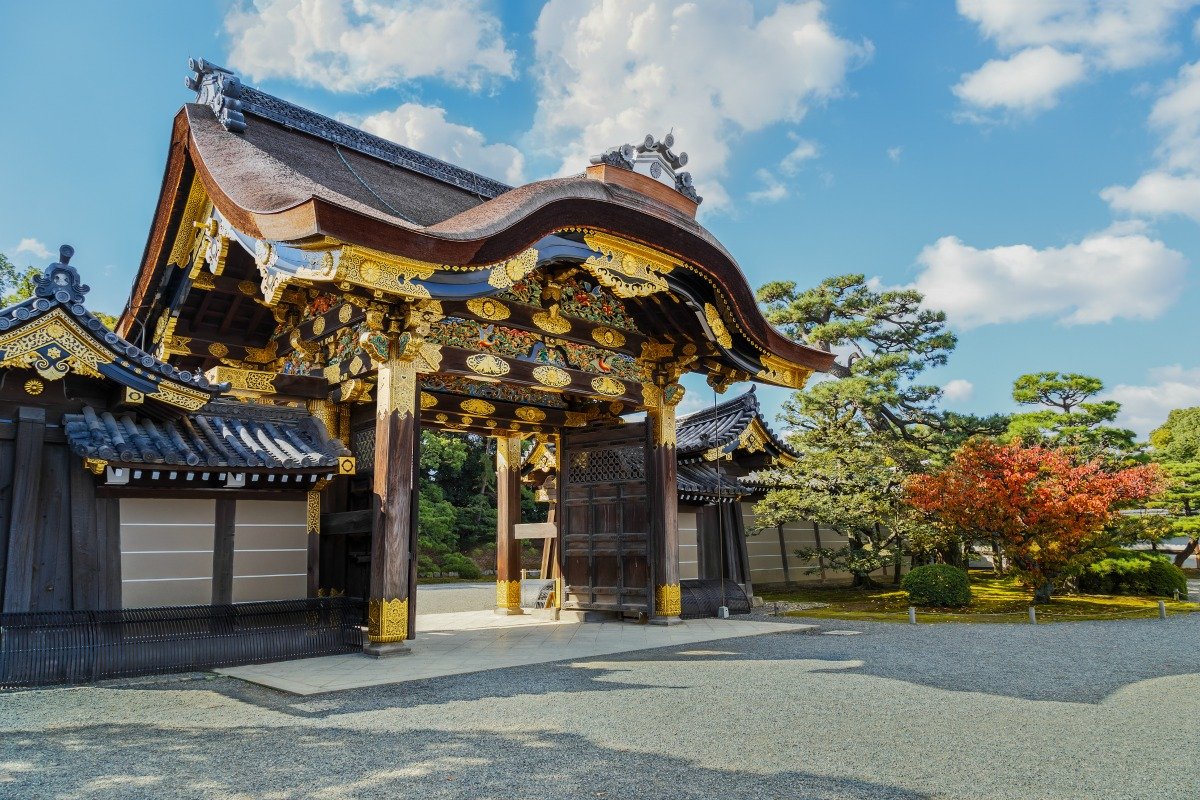 “Built in 1603 as the Kyoto residence of Tokugawa Ieyasu, the first shogun of the Edo Period (1603-1867). His grandson Iemitsu completed the castle’s palace buildings 23 years later and further expanded the castle by adding a five story castle keep.

After the Tokugawa Shogunate fell in 1867, Nijo Castle was used as an imperial palace for a while before being donated to the city and opened up to the public as a historic site. Its palace buildings are arguably the best surviving examples of castle palace architecture of Japan’s feudal era, and the castle was designated a UNESCO world heritage site in 1994.”  https://www.japan-guide.com/e/e3918.html

We walked in the parade at Kyoto’s Gion Festival (Gion Matsuri), visited Hiroshima Peace Memorial Park, fed the deer at the park in Nara, and visited many, many temples, shrines, and Buddha’s, including the largest wooden one – Big Buddha Hall (Daibutsuden) is the world’s largest wooden building  at Todai-ji Temple in Nara Park, Japan

Todai-ji Temple  is a most famous Buddhism temple and the roofing looks similar to Japanese Samurai Helmet at Nara Park, Japan 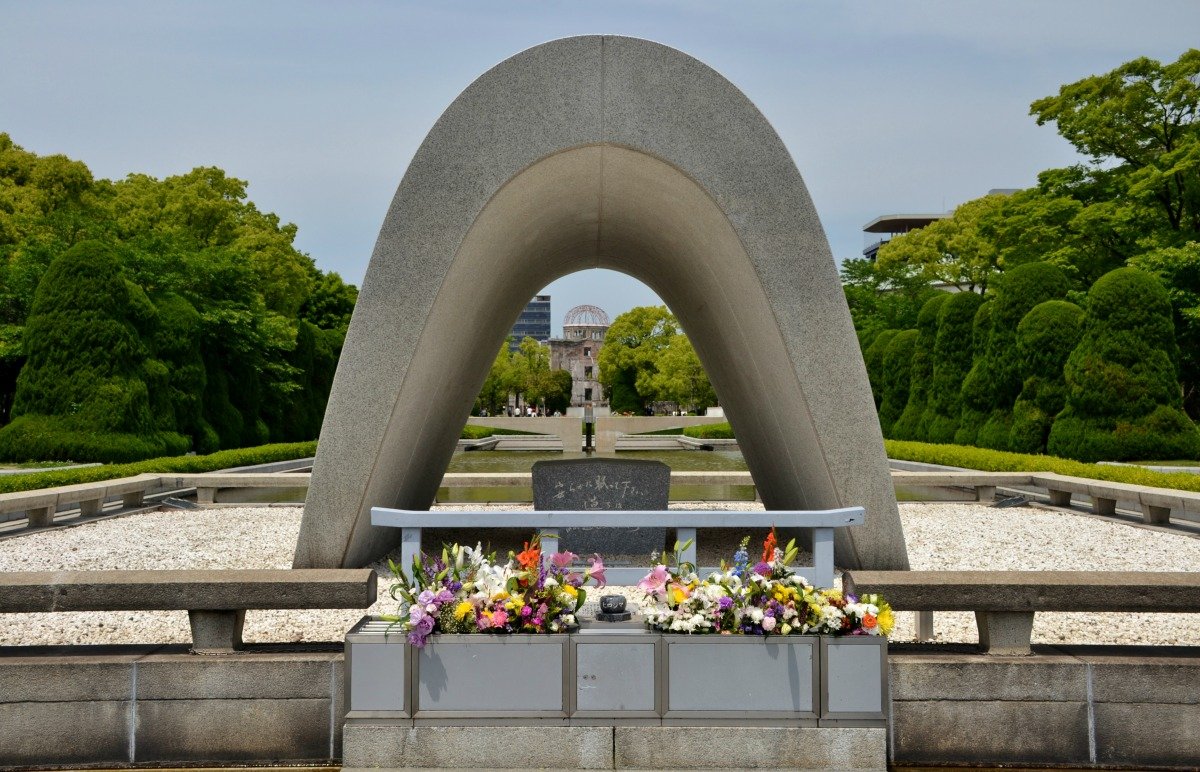 We had a free day in Tokyo and most of our group opted to go to Tokyo Disneyland.  I was hanging out with two girls who had arranged to visit with a couple of college kids who had stayed with them in Canada the year before, and I was invited to tag along.  They took us to the Ginza district to see the shops. I was infatuated with Tuxedo Sam at the time, so throughout the trip I looked for souvenirs with the blue penguin on it. I still have a little case of them.

We had a midnight curfew so there was plenty of time to get into trouble.  They took us to a club called New York New York where we had to buy a keychain to get in – I still have mine.  Entry included food and drinks for the night. The drinks were continuously served up and set on a bar and we simply had to walk up and grab a tray of them to take back to the table.  I have no idea what we were drinking, they were lowball glasses with colored liquid. I remember bringing a tray to the table with a multitude of colors, but I don’t remember if one tasted any different from the next.

I do remember having a lengthy chat with a pimp and a young hooker.  He spoke through her and asked me a ton of questions.  She handed me a little booklet with cartoon images of girls, who all looked like me – young and blonde. I kept the booklet, but awkwardly ended the conversation and went back to dancing with my friends.

When we finally left the club, our car had been towed and we missed our curfew.  The teachers were not happy with us, but we just wanted to go to sleep, and I considered the night a success because I hadn’t been turned into a teenage sex worker.

The next day our Homestay exchange student hosts joined us for a day of visiting the shrines and temple at Nikkō. One day isn’t enough to see Nikko.  The shrines and temples of Nikko form a huge single complex composed of 103 religious buildings (9 are classified as National Treasures and 94 as Important Cultural Properties) within two Shinto shrines (The Tōshō-gū and The Futarasan-jinja) and one Buddhist temple (The Rinnō-ji) located in a gorgeous natural setting. UNESCO registered the 1048 acre shrine complex as a World Heritage site by the World in 1999. 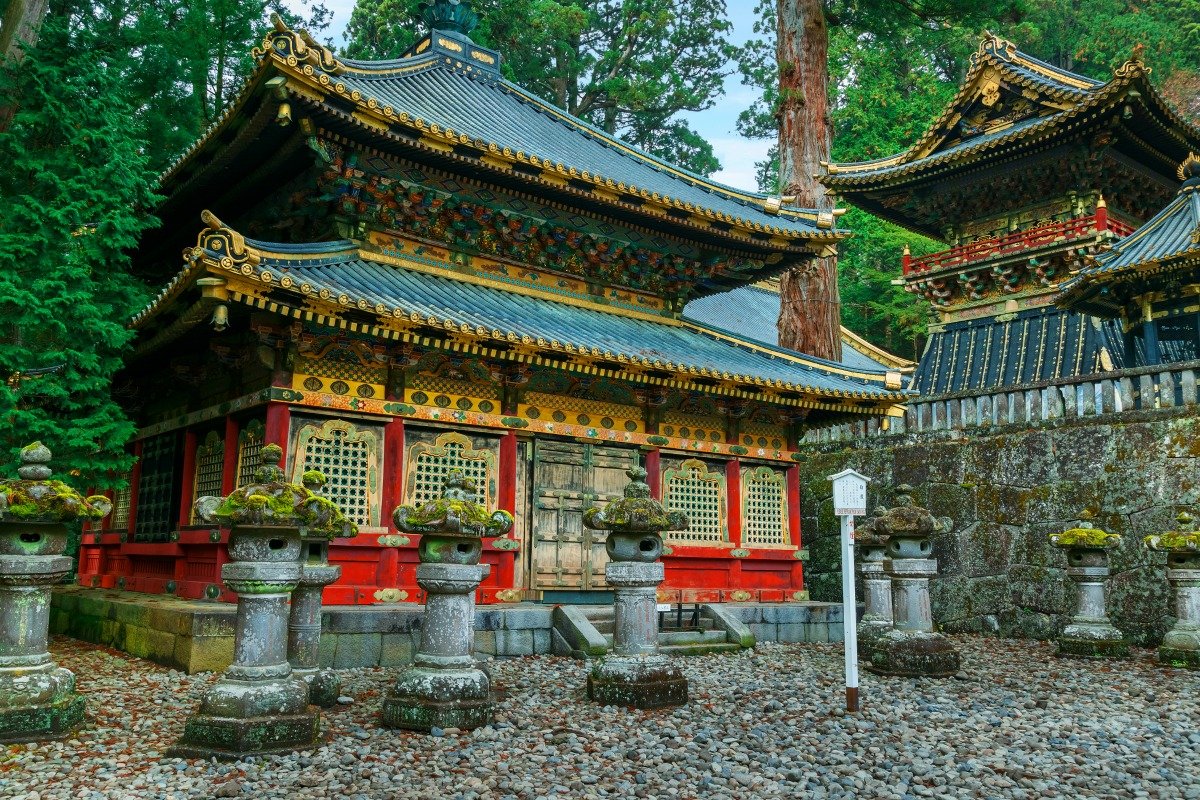 Despite some mischief related to vending machines with alcoholic beverages in them, and our wild night in Tokyo, my experience was ideal.  Being an exchange student in Japan challenged me to communicate better, make decisions for myself, do things that were way outside my comfort zone, and respect and appreciate another country’s culture and customs.

As a mom, knowing what I know, I feel like I’ll struggle with giving my daughter the freedom I had at that age.  Would you let your teen visit a foreign country without you? 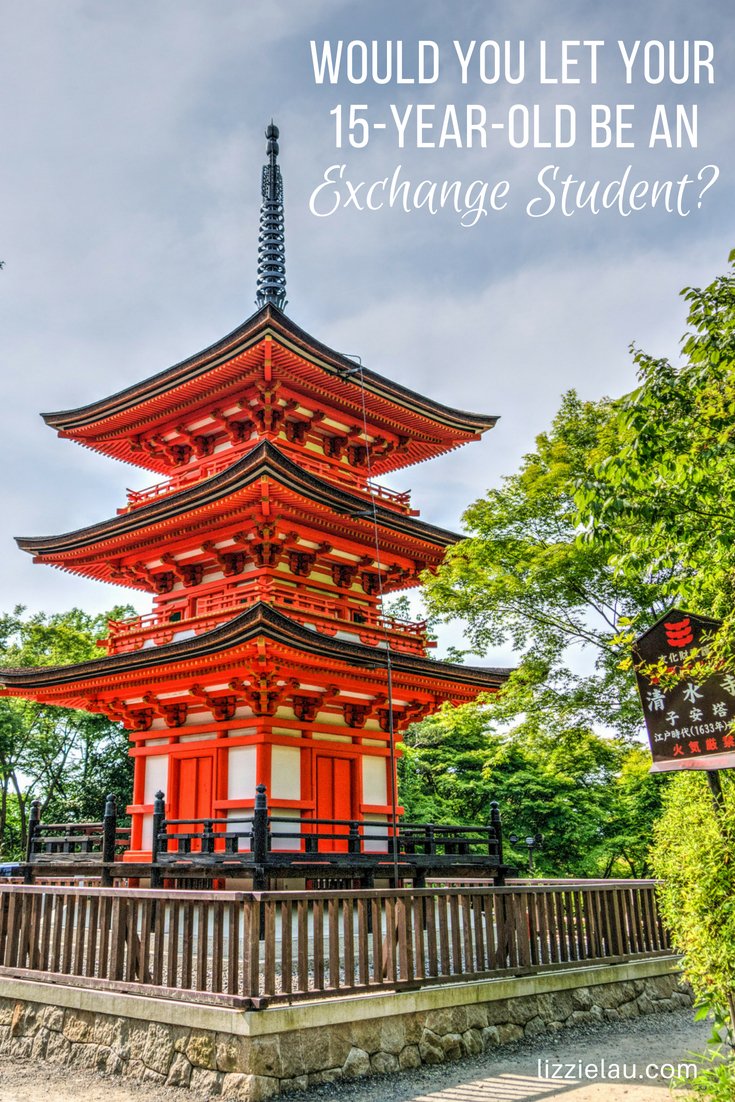 4 thoughts on “Would You Let Your 15-Year-Old Be An Exchange Student?”