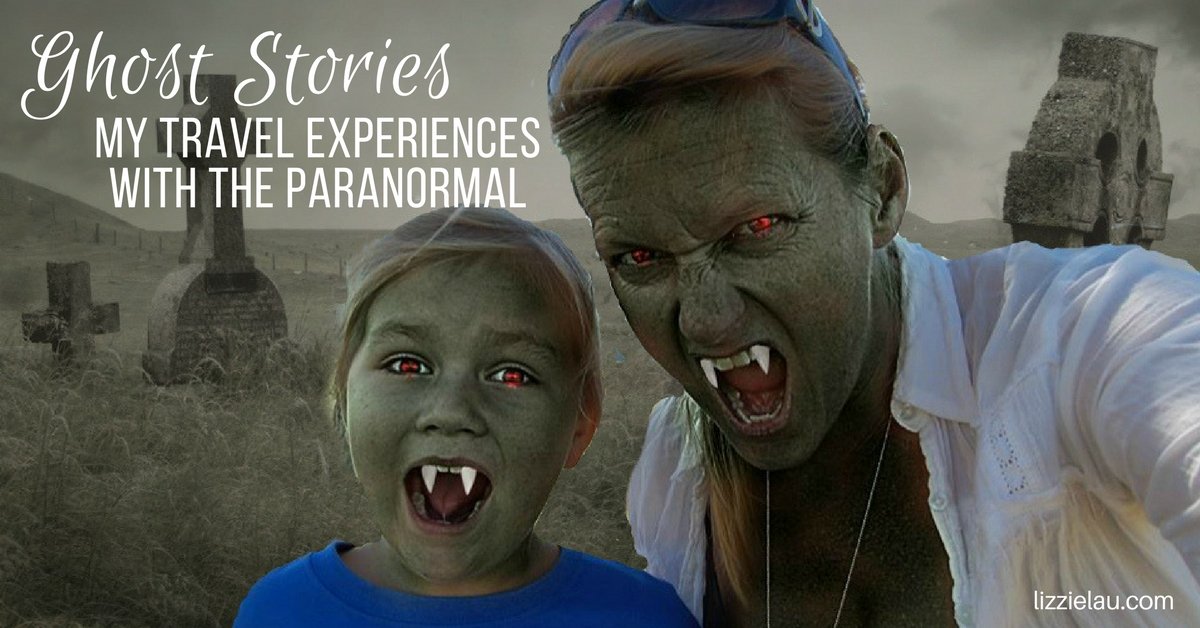 In many parts of the world ghosts are considered a normal part of life. During my travels I’ve experienced a few hauntings. Here are a couple of my ghost stories.

One of the first paranormal events I remember was in a bed and breakfast somewhere in the UK.  I was 13 and traveling with my parents and my little sister.  We were visiting family in Wales and England, drove up to Edinburgh and later took the ferry across to Europe.  I don’t have my travel journal with me so I don’t know what town we were in when this happened, but I still remember the vision like it was yesterday.

We were all sleeping in the same unremarkable room.  It was kind of small, kind of chilly, pretty normal for England.  I woke up in the middle of the night and it had transformed.  I sat up in bed and the normal single door was gone.  In its place were two huge wooden doors, and in front of each door was an enormous dog, like an Irish Wolfhound or English Mastiff.  I could see the dogs by the light of the fire burning in the hearth that no longer existed.  The feeling I had was warmth, comfort, and security.  I knew that the dogs were there to protect us, and I went back to sleep.

When I was 15, I went to Japan as an exchange student with a group of kids and teachers from several schools in the lower mainland of British Columbia.  We all spent 2 weeks with our host families and 1 week touring all the hot spots, Tokyo, Hiroshima, Kyoto, Nara, etc.  Again, I don’t have my journal to get all the details from the trip, but I know that we had just checked into a hotel in Kyoto and I was in a room with several girls.

The rest of the girls had gone down to dinner, but Tina and I were still in the middle of a conversation.  The two of us were sitting on a bench in the room talking when all of a sudden I had a chill, the kind where all my hair follicles tingle, we stopped talking, and wide-eyed turned to the corner of the room where there was a large piece of pottery, like something you would see in a garden.  There was also a man hanging by the neck.  We screamed and ran from the room.  Tina reported seeing the exact same thing.  The hotel staff was very apologetic and allowed us to switch rooms.  We spent the rest of the evening walking around the Gion Festival halfway expecting to see more ghosts.  One of the teachers accused me and Tina of causing mass hysteria.

The house in Crescent Park that we lived in while I was a teenager, until I moved out at 17, wasn’t particularly old, so I don’t think anyone died in it, but some strange things happened.  I remember walking by an upstairs bathroom and hearing someone in there running a bath.  When I got downstairs, the whole family was in the kitchen so I asked which of them had left water running up there.  No one had and when we went up to check, the door was open, the light was off and there was no water running.

Another time I was talking to my Mom and my Aunt in the kitchen, and I was leaning both elbows on the cutting board that covered the Jenn-Air grill that we rarely used.  It didn’t get hot, but suddenly flames came shooting out from under it.  Neither of those incidents compare to the night of the poltergeist.

The Night of the Poltergeist

I was married at the time, but spending the weekend with my teenaged sister while my parents were out of town.  We were asleep in my parents bedroom in the east wing of the house when something woke me.  I was used to the normal noises of the house, and the occasional skittering sound of squirrels or raccoons, but this was different.  I was convinced that the house was being burglarized.  I could hear furniture being dragged around downstairs, doors opening and closing.  It was loud.  The only thing I didn’t hear were voices.

A million thoughts raced through my head.  Someone knew my parents were away and had sent a team to steal their art collection.  They would eventually come upstairs and discover that the house was not empty.  How would I protect my sister?  I was contemplating dragging her under the bed to hide when her eyes snapped open.  She sat up and said, “Call 911”.  I called and the dispatcher kept me on the line as the police arrived and walked around the house.  There were no signs of intruders.  I was asked to hand the phone to my sister and go downstairs to open the door for the police.  I crept down the stairs expecting to see mayhem, but not a thing was out of place.  The police officers stayed for a while, but clearly thought we were nuts.  We didn’t sleep the rest of the night.

Some of the people who’ve heard the story think that my sister may have been responsible for the episode.  There have been many accounts of teenagers unconsciously causing inanimate objects to move using telekinesis.

You tell me, does my sister look normal?

Single Dad Laughing’s list of Creepiest Things Ever Said By Kids is a must read, and a friend recently suggested I write in about some of the creepy things Offspring says.

Once when she was having a nightmare and was crying a little. I was trying to cuddle her when she said, in a very clear voice, “It’s here. It’s right beside me.”  Trust me when I tell you I looked to see if there was something beside her.  On the off chance that there was something I couldn’t see, I told it, that it was not welcome.

Another time when she was little and was having a meltdown and I was offering her a hug when I said her name and she shook her head and said, “Your daughter isn’t here anymore, she is gone – FOREVER.”  Yikes, right?  Fortunately after a hug and a snuggle, my daughter was back. I’m almost 100% certain of that.

Do you believe in the paranormal? Do you have any ghost stories?

4 thoughts on “Ghost Stories – My Travel Experiences With The Paranormal”