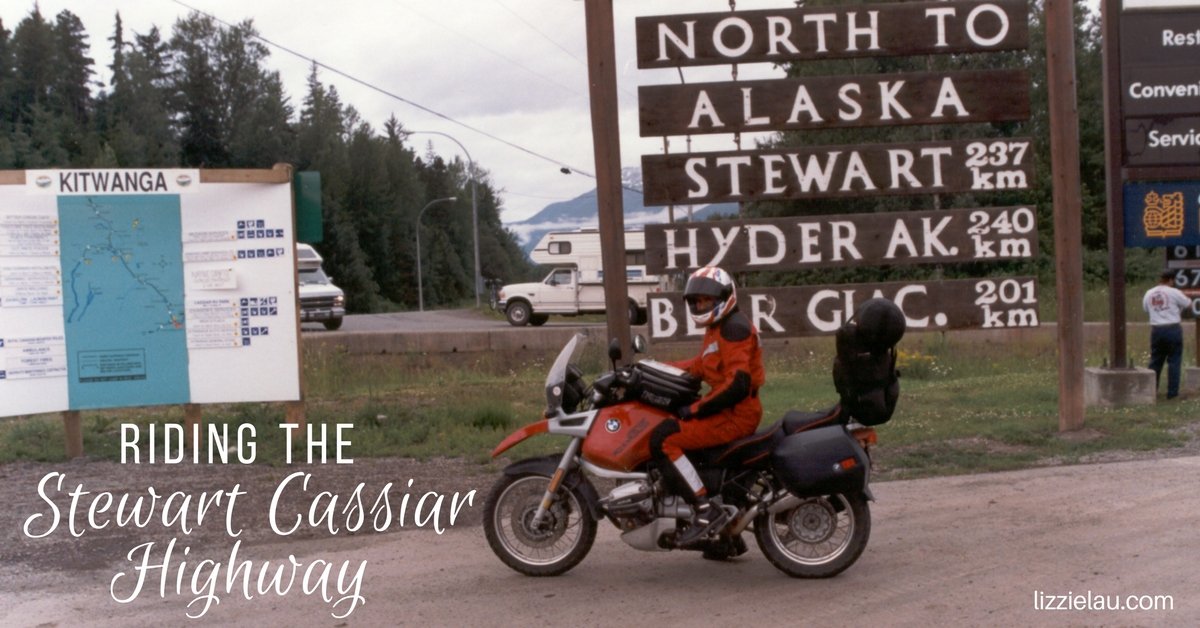 There’s a big sign at Kitwanga Junction, BC where Highway 37, aka the Stewart Cassiar Highway begins. This sign marks the beginning of the coolest couple of days in our 15,000 mile motorcycle adventure from Florida to Alaska and back.

We were based in Melbourne Beach, Florida when we did this trip, but started with a shakedown ride to Key West just before we left for Alaska. We were riding a new BMW R1150GS two up with camping gear in a t-bag behind me, hard panniers, and a tank bag, though it still felt like we were traveling light for a 2 month trip.

After Kitwanga Junction, the stretch of road ahead of us was pretty desolate, so we took advantage of the station at the junction and topped up the fuel, checked the tires and cleaned the windscreen before heading up the road.  Check out this cool map.

We were the only beings traveling north on this road, through mile after mile of lush green forest punctuated by flowered meadows and lakes. Many sections of the Stewart Cassiar Highway are unpaved but mostly well maintained. X2 was delighted to be riding in the dirt and coming out of corners couldn’t resist dialing on the throttle so the rear tire would step out.  I lost count of how many times he wheelied on this trip with full luggage AND ME on the back.

The first sign of civilization came after we crossed the Skeena River and rode into Kitwancool which means “people of the place of reduced number”. A very fitting name because we hadn’t seen another soul since leaving Kitwanga. Kitwancool is a small Gitkasan Village, renowned for it’s totem poles. The oldest pole in the world, still standing is surrounded by 22 others in front of the Band Administration Office.

We weren’t in a hurry so we watched for side roads to explore, and at about the 60 mile mark we spotted a dirt track that we hoped would lead to a lake we could see in the distance.  Sure enough, the road dead ended and we got off the BMW for a quick break in front of the picturesque, lily covered lake with a backdrop of snow capped mountains.

The rain started just as we got back on the highway. During our two month trip I don’t think we had a single riding day where we didn’t encounter some rain. We were riding in Aerostich protective suits which we loved because they were waterproof, comfortable and easy to get off and back on when we stopped.  We did discover on this trip that while the suits are waterproof, the zippers are not and where the rain pooled in my lap it seeped through and I ended up looking like I’d peed myself.  For the next trip we carried Frogg Toggs rain gear to pull on overtop.  We both wore electric vests under the Aerostich suits and X2 was happy he had added heated handgrips when we bought the BMW.

There are a lot of single lane wooden bridges on this highway which we approached with caution, prepared to yield to oncoming traffic, though the traffic was nearly non existent.

We cruised past Mount Weber and the oohing and ahhing through our headsets never stopped.  Every time we agreed that the scenery couldn’t possibly get more beautiful, it proved us wrong.

At the Meziadin Junction we turned onto 37A and head for Stewart, B.C. and Hyder, Alaska.  We lost elevation quickly as this highway dropped us down into the valley right in front of Bear Glacier.  We pulled off and stared slack jawed at what looked like an immense frozen turquoise river coursing down the side of the mountain.

We opted not to cross the Canada/US border into Hyder, but rode as far as we could to get a good look at the bay. In Stewart, we stopped at the Bitter Creek Cafe for a delicious salmon dinner and then checked into a hotel for the night. We’re already so far north that we have to go to bed before the sun sets.

We stopped for another look at Bear Glacier on our way back to the Stewart Cassiar Highway.  It looked different in the morning light, a much darker shade of blue.  We had to tear ourselves away from the view though because we were still looking at about 400 miles of mostly wilderness to reach the Alcan Highway.

We rode all morning and the only other traveler we saw was a big black bear that crossed the road in front of us. We also saw a convoy of antique cars, which at first seemed crazy. Who would risk driving an antique on a dirt road?  I guess the point is that they were built to drive on dirt roads!

We stopped in Bell II to get some lunch and top up the fuel tank. Every time we stopped people noticed the Florida tags on the BMW and wanted to know about the motorcycle and our trip.

We stopped again at Iskut, and after passing beautiful Dease Lake, we took a break at Jade City to check out the massive jade formations.  From there it was only about 80 miles to the junction of the Stewart Cassiar Highway and the Alcan Highway. Just before we reached it we crossed into the Yukon Territory and stopped for a photo.

The Stewart Cassiar Highway was easily one of our favorite scenic highways on our 15,000 mile road trip.

3 thoughts on “Riding the Stewart Cassiar Highway – North to Alaska!”