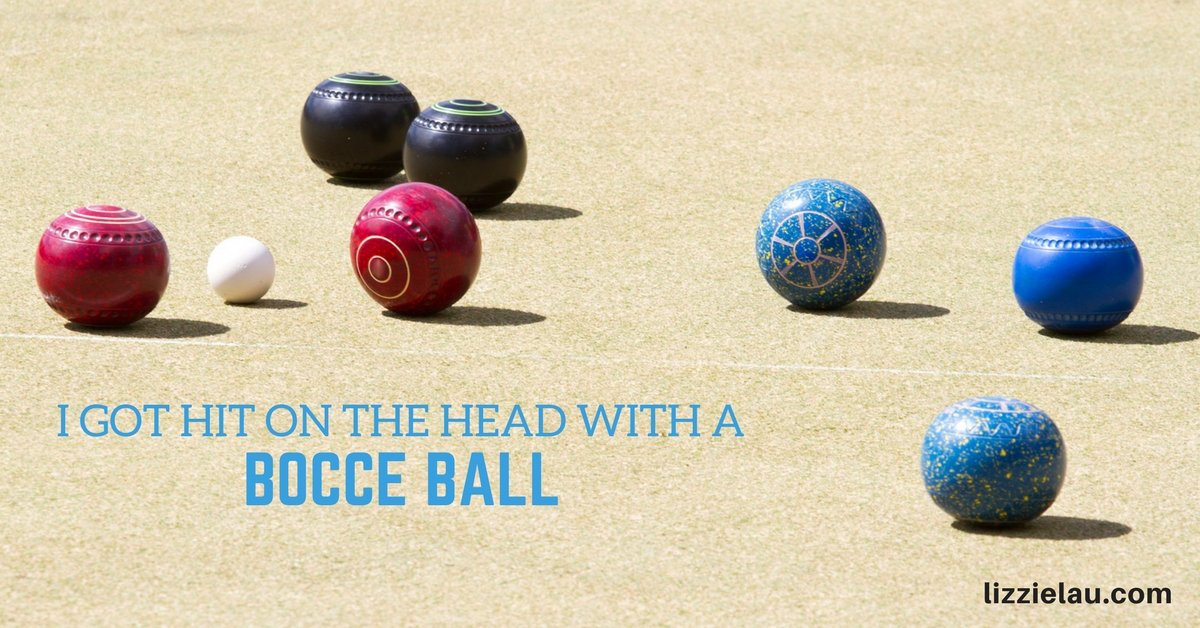 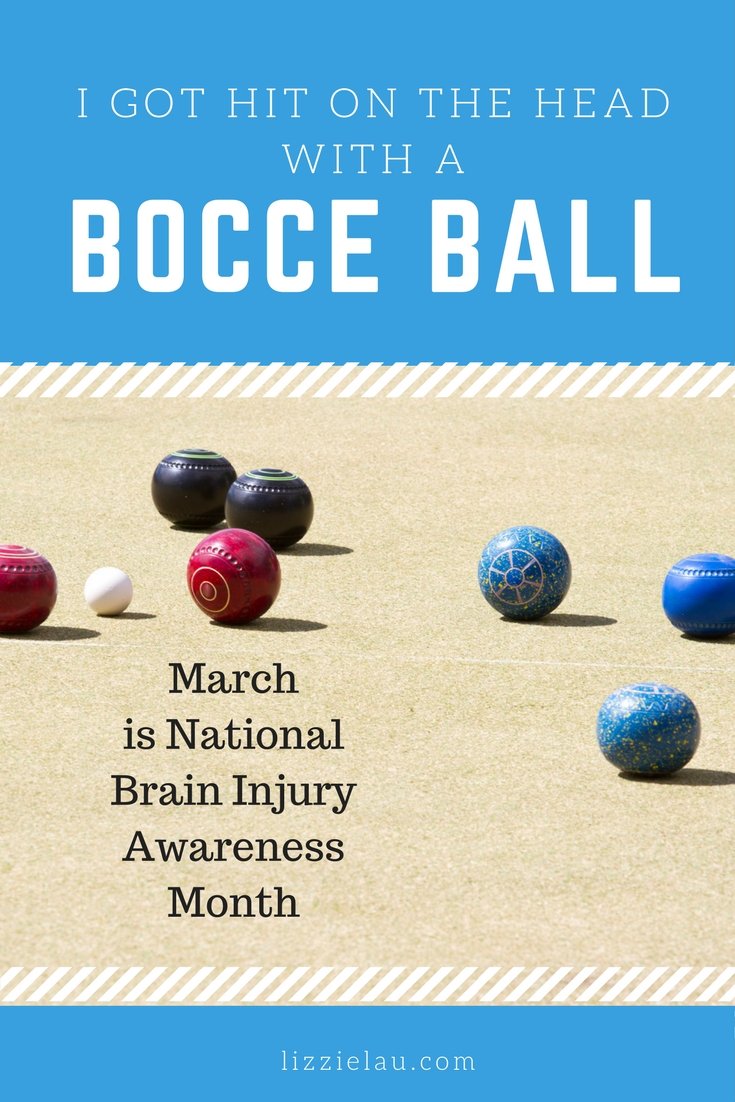 March is National Brain Injury Awareness Month, so I figured I’d update this post I wrote in 2014 about the time I got hit on the head with a bocce ball.  This wasn’t my first concussion, in fact I once had a neurosurgeon tell me to stop falling on my head. It was, however, my most dramatic.

In 2014 we hosted a family reunion at my parents’ place in Vancouver, Canada where we spend every summer. When my cousin Maria first suggested a reunion we debated where to have it and when. We settled on August 21-24 because we knew that another cousin, Kiwita, would be in town to run the Sea Wheeze Half Marathon in Vancouver, and that she would be bringing her 3 kids. Everything started to fall into place. Maria, my mom, my sister and I all decided we’d train for and run the half marathon too. A few local friends planned on running it too, and we all got pretty amped up about the idea. I described my training schedule here. Training went really well until I got tendonitis in both achilles tendons. I did a 9 mile run at the track and it took over 2 weeks for me to recover.

I Got Hit On The Head By A Bocce Ball

My parents live on 5 acres, so we set up for badminton, croquet, and bocce. We have an awesome fire pit for night time bonfires and s’mores, and enough outdoor tables and chairs for everyone to eat outside comfortably. All our meals were pot luck and it worked out great.

The kids and adults enjoyed the games and there was no stress and no drama. As I’ve mentioned before, my family has the capacity to do drama Jerry Springer style. Friday afternoon was our main event, with games followed by a potluck supper. 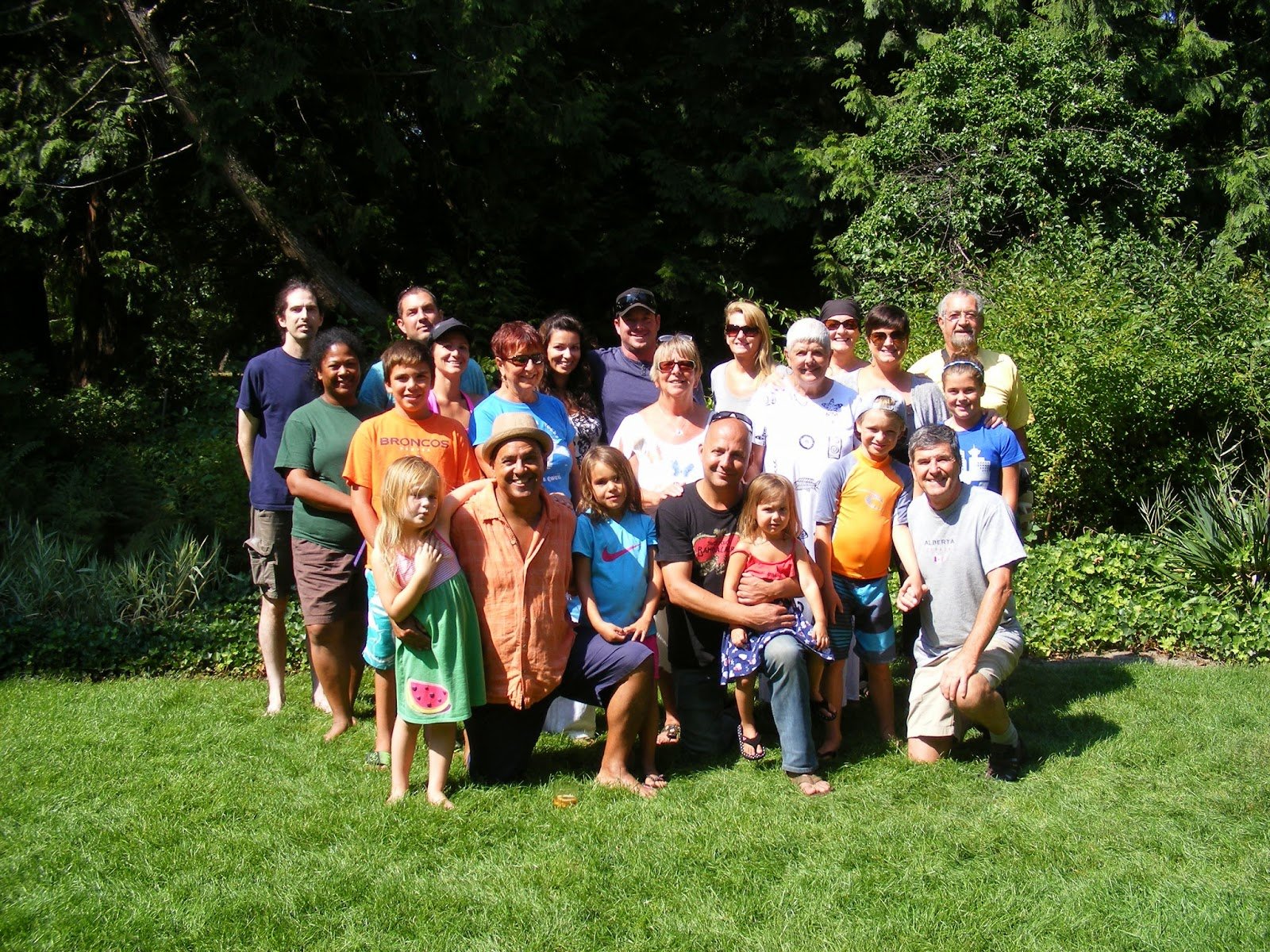 In between dinner and dessert I got involved in a couple of games of bocce. We had just finished, and I was bent over to pick up a ball when my 7 year old nephew threw one up in the air and it landed on the back of my head. The sound was sickening, I’m actually sweating and nauseated just typing this. It also hurt. I went inside and put an ice pack on the bump that was coming up, and I was grateful that it was a bump and not a caved in spot.

Two of my aunts are nurses and I went into a full on anxiety attack as they discussed the possibility of a concussion and/or brain bleed. Auntie Ann was staying with us so she decided that she would wake me every two hours to ask me questions and make sure that I didn’t need to go to the ER. I probably got about 3 hours sleep. And this was the night before our half marathon!

Running A Half Marathon With A Concussion

Mom and I got up at 5am and my sister picked us up 20 minutes later to drive to Vancouver. At this point, I planned to mostly walk it because of the concussion. For a few minutes when I first woke up, I seriously considered rolling over and going back to sleep. I’m glad I didn’t. Mom and I got into the corral with the last group, along with Maria, Jen and Tina.

The energy was overwhelming and I couldn’t help it, I had to try running. Mom and I jogged with walk breaks for the first 12km and then my achilles tightened up so badly that I couldn’t run. I wanted to quit a couple of times and nearly got off the course before we headed into Stanley Park along the sea wall.

I told Mom to go ahead and run, but she wouldn’t leave me. We limped across the finish line. Not the result I had hoped for, but I’m proud of us for finishing. The event was fantastic! I’d love to try again next year. I can’t believe I’m saying that. By the end of the race I was smiling on the outside, crying on the inside, and swearing I would never do it again!

My memory isn’t what it used to be. I don’t know if it’s a result of this head injury or the compound effects of all the previous ones, oh yeah, I guess I forgot to mention that a couple of years later I had an x-ray for an unrelated injury and the doctor could see the signs of remodeling after a skull fracture! I use a bullet journal to keep track of things I don’t want to forget, and set a lot of reminders.

I worry about the future, enough that I’ve avoided watching the movie Concussion because I know it would give me an anxiety attack.